Songwriter Jimmy Webb was interviewed by NPR right after Glen Campbell’s death last week. Webb wrote some of Campbell’s biggest hits, including, "By the Time I Get to Phoenix", "Wichita Lineman", and "Galveston.” Webb said that Campbell didn’t get enough credit for his hits. "Nobody compared with him when it came to picking a song and then arranging it," Webb said. "He left his stamp on whatever material he did."

This statement certainly applies to Campbell’s biggest hit, “Rhinestone Cowboy” (1975). It was written (words and music) by LARRY WEISS, now 76. Weiss recorded it in 1974, but it hardly sold. Campbell chanced to hear it in Australia and was “pitched it” by a music executive upon returning to the States. He made the wise decision to record it and crafted it into a hit with the help of top producer DENNIS LAMBERT, now 70.

Laurence “Larry” Weiss, the son of a textile manufacturer, was raised in Queens, NY and Los Angeles. He had some success in songwriting in New York and Los Angeles. But he had no major hits before “Rhinestone Cowboy” and no major hits since. Still, according to a 2013 profile and interview in “MAMi” magazine, Weiss lives a comfortable and happy life in Nashville. In 2010, he released an album, “Cuts and Scratches,” that included the song “My Forefathers.” “MAMi” says it’s “Larry’s tribute to his Jewish ancestors that proclaims how proud he is to carry on their tradition.”  It’s not a great song, but I appreciate knowing that the original Rhinestone Cowboy is a proud Jew. 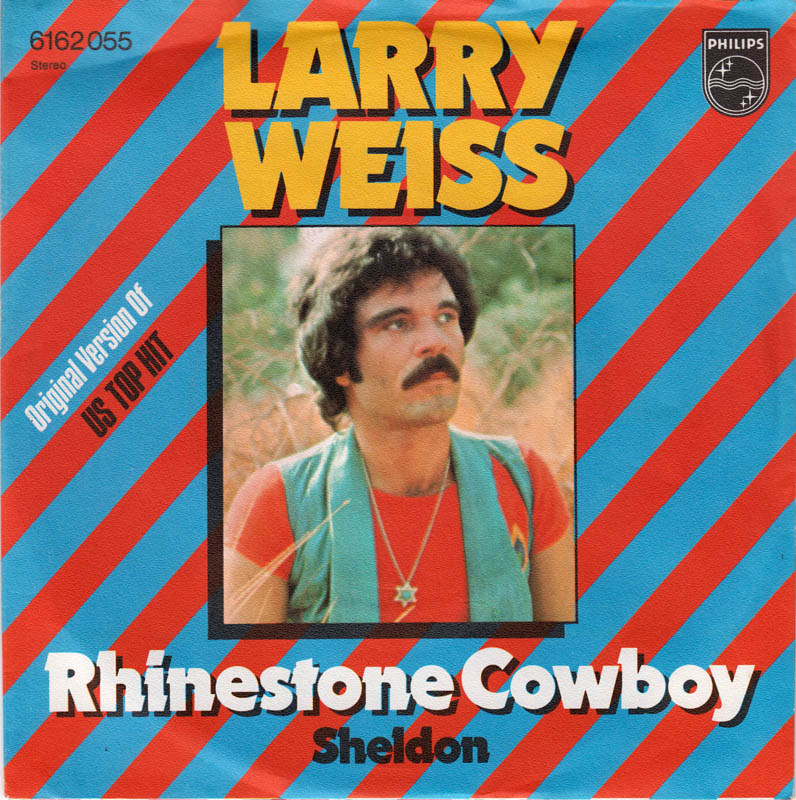 Casablanca: Add another Tribe Member and Watch it Again

August is the slowest month for new films, award shows, etc. So, this is the time to tell you about something I’ve long wanted to: “How Jewish” the classic 1942 film, “Casablanca,” is or was. I was spurred by the “new news” (courtesy of a great on-line family history expert) that actor PAUL HENREID (1908-1992) had a Jewish father, and, just possibly, a Jewish mother. Henreid’s most famous role was as Victor Laszlo, a star “Casablanca” character. Laszlo is the Czech freedom fighter married to Elsa (Ingrid Bergman). At the end of the film, café owner Rick (Humphrey Bogart) famously tells Elsa to go back to Victor.

Henreid’s father was Baron KARL ALPHONS HERNREID, a Viennese banker.  Karl and his brothers (he only had brothers) changed their family name from Hirsch to Hernreid around the time Karl was “raised” to the Austro-Hungarian Empire’s nobility (The actor slightly changed the last name spelling in the States). It appears that Paul’s mother wasn’t Jewish, but conversions to Judaism are very hard to research. Paul’s wife, LISL (1908-1993), also had a Jewish father and possibly, again, a Jewish mother. Paul and Lisl, who helped Jewish friends escape Germany, were virtually penniless when they arrived in America in 1940. The Baron and three of his brothers died before the Nazi takeover (one fighting for Austria in WWI). The other two brothers made it to America.

MICHAEL CURTIZ, a Hungarian Jew, won the Oscar for directing “Casablanca.” The film’s screenwriters, HOWARD KOCH and the brothers PHILIP and JULIUS EPSTEIN, won the best screenplay Oscar.  Two other Hungarian Jews had big supporting roles: PETER LORRE as Ugarte, the petty crook who steals “letters of transit” and, before his death, entrusts them to Rick—and S.Z. “Cuddles” SAKALL, as Carl, the cute round-cheeked waiter. Others: German Jewish refugee CURT BOIS as “the pickpocket”; French Jew MARCEL DALIO, who was a big star in France, as Emil, the croupier; JOY PAGE as Annina, a refugee who (police) Inspector Renault almost blackmails into sleeping with him; and DAN SEYMOUR (born Dan Seymour Katz) as Abdul, the doorman.

If you don’t already subscribe to Amazon Prime, perhaps next month is the time to start enjoying your “trial” free month and stay with the service a bit longer. Amazon’s biggest hit, “Transparent,” featuring a Jewish family, returns on Sept. 22 and the just released trailer has the family traveling to Israel. The trailer shows them landing in Israel and seeing sights like the Western Wall and the Dead Sea. Bingewatch the previous three seasons before the new season begins.

Actress Abigail Breslin, now 21, became famous playing ALAN ARKIN’s granddaughter in the surprise hit “Little Miss Sunshine” (2006). Recently, she told the NY Post that she was “half Jewish.” Well, a friend looked into that claim. If somebody can be “half Jewish,” Breslin is “half right.” Her paternal grandmother is Jewish.