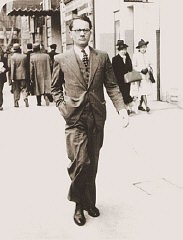 One individual highlighted in the exhibition is Varian Fry.  Fry was a Harvard educated editor from New York City when he became involved with the Emergency Rescue Committee (ERC), an organization that promoted the emigration of refugee intellectuals from Nazi occupied Europe. In 1940, he traveled to Europe with the mission of assisting in the emigration of a small number of intellectuals; however, he found an even greater number of artists, writers, and others who were desperately trying to escape.  Fry sought out assistance from other American diplomats and French citizens. Together, they aided in securing false papers and escapes from French internment camps.  Over 4,000 refugees received assistance from Fry and his group.

In 1941 Fry was expelled from France because of his activities. Upon returning to the United States, he learned that the State Department as well as the ERC disapproved of his rescue activities. All major recognitions for his rescue efforts were posthumous. Those helped by Fry include Marc Chagall, Max Ernst, Hanna Arendt, and Jacques Lipchitz.