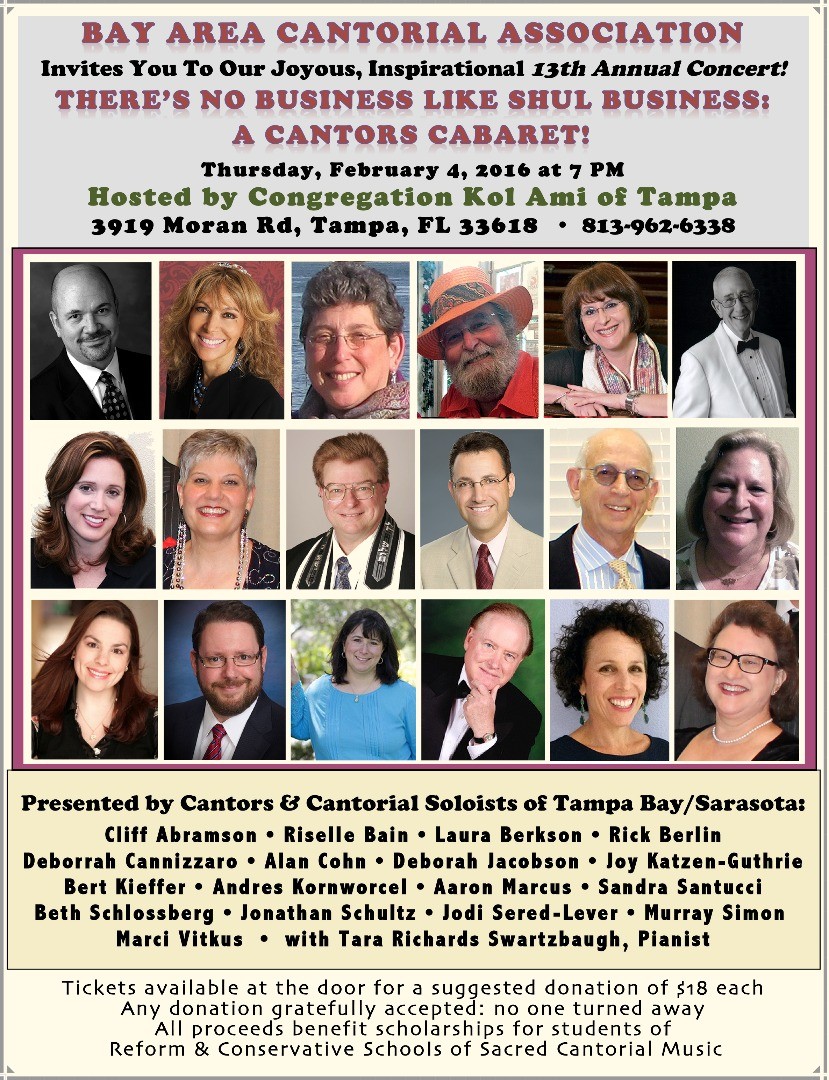 The Bay Area Cantorial Association (BACA) 13th annual cantorial concert, THERE'S NO BUSINESS LIKE SHUL BUSINESS: A CANTORS CABARET! with cantors and cantorial soloists serving the Tampa Bay and Bradenton-Sarasota regions. Hosted by Congregation Kol Ami, 3919 Moran Rd., Tampa 33618, 813-962-6338, the concert is Thursday, February 4, 2016, at 7 PM.  Tickets are available at the door of both concerts for a suggested donation of $18 each. All donations gratefully accepted, no one will be turned away. Proceeds benefit scholarships for cantorial students of both Reform and Conservative Sacred Music Study.

Now in its 13th year, BACA's annual concert celebrates Jewish life with musical solos and ensembles covering a global range of writers, eras, styles, languages, genres, and cultures. This year's lively concert will focus on cabaret, stage, and film selections with a connection to Jewish writers or Jewish experience. BACA holds its concert annually on or near the weekend of Shabbat Shira (Sabbath of Song), when it has become customary around the world to hold special music-and song-related services and events. BACA membership includes active cantors and cantorial soloists from the Tampa Bay and Central Florida regions. The annual concert is BACA's chief fundraiser for cantorial scholarships to Reform and Conservative cantorial organizations and schools of sacred music study. Proceeds have provided scholarships to the conservative and reform sacred schools of music in addition to conservative and reform professional cantors organizations. To date, more than $42,000 has been raised by BACA for cantorial scholarships.